Hampton Roads Business OutReach (HRBOR) was founded in 2006 to promote LGBT influence through business ownership, workforce equality and active consumerism, creating prosperity to support equality, diversity and inclusion. We are the oldest LGBT Chamber of Commerce in the Commonwealth of Virginia, and the only one serving the Hampton Roads metropolitan area.

In December of 2006, Christianna Flynn saw a need to give Hampton Roads LGBT business owners, consumers and professionals a place to meet, exchange ideas and resources and support each other in a professional business setting outside the existing social environments of the community. She held a meeting with key business owners to gauge their interest in creating the area’s first LGBT Chamber of Commerce. Her idea was warmly received, and the Hampton Roads GLBT and GLBT Friendly Chamber of Commerce was created.

March and April of 2007 were consumed with logistics: incorporation with the state corporation commission; domain names obtained and a website developed; and by-laws written. The directors adopted HRBOR’s wave logo as an homage to the area’s maritime heritage and adopted the tagline “Developing diversity, creating community” to promote the mission ideal of inclusion in the community. The chamber’s official title of Hampton Roads Business OutReach grew from the consistent thread of inclusion versus exclusion.

A gala launch celebration was set for May 9th at Norfolk’s Town Point Club. Thanks to the board’s tireless planning and outreach, over 200 enthusiastic supporters attended.

At the gala, the board unveiled HRBOR’s Founding Members membership level. Limited to 30, these businesses found value in HRBOR and believed in our mission. The organization will forever be in their debt for their confidence and vision.

In June 2007, HRBOR’s signature networking events were launched. Third Thursday became not only the date for this and all future events, but also the event’s moniker. Founding member Bank of the Commonwealth who had also sponsored the gala launch hosted the premiere event in their Virginia Beach location. Eager new members lined up to host future events. Within a single month, paid memberships reached over 50. Within the first year, all 30 Founding Member openings were filled and the board of directors welcomed its first new members: Stacey Allin, Nicole Carry and Robert Ianucci.

In the first year, members and guests were treated to a variety of locales for the monthly networking event ranging from local PBS station and Founding Member WHRO’s studios to law offices, dance studios, new construction condominium sites, the iconic Virginia Stage at the Wells Theater and Decorum Furniture (who would become the final Founding Member and one of HRBOR’s first sponsors).

The whirlwind first year of HRBOR culminated in an elegant first anniversary event at the Norfolk Sheraton Waterside on the waterfront in downtown Norfolk. Justin Nelson, President of the NGLCC was in attendance and gave the keynote address.

In May of 2010 the NGLCC awarded HRBOR its Rising Star Chamber of the Year award. An NGLCC representative presented the award to newly elected board President Nicole Carry at the monthly Third Thursday networking event honoring HRBOR’s 3rd year anniversary hosted by Decorum Furniture. Almost 300 people were in attendance to mark this auspicious occasion.

In the years since, HRBOR has continued to grow and diversify its membership. We now have 100 members representing not only LGBT-owned businesses, but allied businesses as well. Our Safe Commerce program, LGBTE Business Certification offering, and social, education, and networking events are the keystones. We partner with other organizations and government entities, who reach out to as a primary resource for the Hampton Roads’ LGBT business community. We have a strong presence in local higher education with our Hamer Family Scholarship, and we actively mentor upcoming business leaders from the area’s colleges and universities. 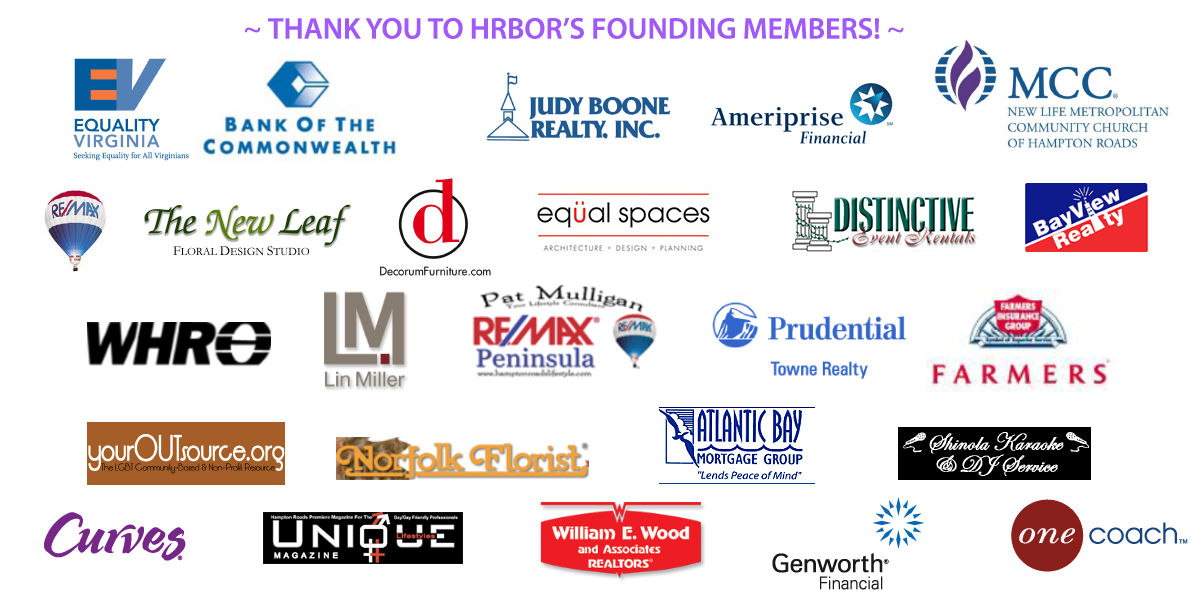 Our mission is to empower and support our LGBT and allied member businesses and professionals and provide our community an inclusive and welcoming environment to live, work, and grow. We are an affiliate member of the National Gay and Lesbian Chamber of Commerce.